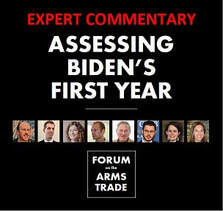 January 20, 2022: U.S. President Joe Biden was inaugurated one year ago today. The Forum on the Arms Trade invited members of its community, including experts and emerging experts, to examine aspects of the Biden administration's first year.

Each assessment is individually authored and does not necessarily reflect the opinion of the expert's organization. Inclusion here does not imply agreement with or endorsement of the opinions of others. The Forum itself does not take positions.

Explanation: The Trump administration issued an ethics executive order that imposed restrictions for those coming from industry and for lobbying afterwards, but it was rescinded at the end of the administration. The Biden administration issued a stronger ethics executive order that included the first attempt to address “golden parachutes” of companies giving political appointees bonuses for going into government (see more here). It did not alter standing rules imposed in law by Senator John McCain to prohibit behind-the-scenes lobbying activities and broaden restrictions for senior personnel. The Biden administration also opposed a provision that would have extended recusal periods permanently in their statement of administration policy. Both the Biden and Trump administrations selected secretaries of defense and other senior personnel who served on boards, worked for, or lobbied on behalf of top Department of Defense contractors.

​Explanation: The Arms Trade Treaty (ATT), which came into force in 2014, is the first international legally binding instrument to regulate the global trade in conventional arms. The ATT has 110 States Parties, including nearly all of the United States' key allies. At the most recent ATT Conference of States Parties in September 2021, the U.S. delegation made a single intervention - announcing that the United States would soon issue a new conventional arms transfer (CAT) policy that would help determining “the proper relationship of the United States to the Arms Trade Treaty.” The United States also voted in favor of the annual UN resolution on the ATT (see L.46), reversing the Trump administration's "no" vote in 2020, when it was the only country to oppose it (see L.53). However, no new CAT policy has been issued, and no review of the U.S. ATT policy has been undertaken.  The President also has not reversed the Trump administration’s policy of “unsigning” the ATT (which could be done with simple letter informing the United Nations), nor has it announced that it intends to honor its signature to the treaty. This is deeply disappointing, especially since these are steps the President could take on his own authority. Eventually, the United States should seek ratification of the ATT from the Senate, but at a minimum in and in the short-term, the Biden administration should begin to socialize the ATT amongst key stakeholders, including Congress, and make the case for why the responsible and regulated arms trade is in the U.S. interest and consistent with U.S. policy and practice.

​Explanation: Biden’s assumption of the presidency allowed for a reevaluation of U.S. policy regarding arms transfers to Taiwan – an important opportunity that was squandered. Rather than reevaluate U.S. policy and consider greater restraint in such transfers, the Biden administration chose to perpetuate the Trump administration’s policy of selling major defense articles to the Taiwanese. In August, for example, the Biden administration approved the sale of 40 M-109 self-propelled howitzers and associated gear to Taiwan for an estimated $750 million. Transfers of these howitzers and other costly weapons systems will do little to enhance Taiwan’s self-defense capability in the event of a Chinese invasion while highlighting the island’s dependence on U.S. military support, increasing the risk of U.S. involvement in a future cross-Strait conflict. A more prudent U.S. arms policy would emphasize the transfer of light arms for a citizens’ defense system, like that pursued in Switzerland, to make invasion an unappealing prospect. Such an approach would be consistent with U.S. commitments made to China in the "Arms Trade Communique" of August 1982 and help reduce tensions in the region.

​Explanation: The Trump administration’s 2020 policy that would allow use of antipersonnel landmines anywhere in the world and rejection of Obama-era goals to one day join the Mine Ban Treaty made pre-existing policy dangerous as Biden entered into office. Ambassador Linda Thomas-Greenfield’s April 8 statement that "President Biden has been clear that he intends to roll back this policy, and our administration has begun a policy review to do just that" adds the “+” to the “D”. But this administration’s failure to act thus far is alarming. The United States remains at odds with 164 countries, including all its NATO allies, in envisioning a use for these indiscriminate weapons. (See resource.)

Explanation: The risk of arms sales compounds over time in the direction of disaster and the Biden administration has done nothing to change course. President Trump’s zeal for selling weapons to risky countries is well documented. In response, the Biden administration told Congress that it seeks increase the emphasis on human rights. Yet, little suggests that this is an honest goal. As of now, the administration has failed to revise its conventional arms transfer policy. The result is weapon sales to countries that violate human rights and entangle Washington in conflicts abroad. Beyond saying many of the right things, until the administration makes an honest effort to reduce risk in sales, the U.S. continues to be complicit in Saudi Arabia’s war in Yemen, supportive of murderous governmental policies in the Philippines, accepting of weapons dispersion to criminal organizations in Mexico, and many other calamitous situations around the globe.

In May 2021, the Biden administration blocked the Security Council on three occasions from calling for a ceasefire as Israel attacked the blockaded Palestinian Gaza Strip with US-sourced weapons. At least half of the 261 Palestinian fatalities in this attack were civilians, according to the UN. In the single deadliest incident, Israel killed 43 Palestinians in a nighttime airstrike on a residential building in the Rimal district of Gaza City. The Associated Press reported that the munitions involved were “likely GBU-31s, packed with 430 kilograms (945 pounds) of high explosives.” Two bombs “had serial numbers identifying them as fitted with Joint Direct Attack Munition kits manufactured by Boeing Co. at its factory in St. Charles, Missouri, to make them so-called ‘smart bombs,’ able to be guided to a target by GPS or lasers.” Defense for Children International Palestine also reported on May 12 that “a U.S.-sourced Israeli Apache attack helicopter killed two Palestinian children and critically injured a third.” Rather than hold Israel accountable for these obvious violations of the Arms Export Control Act, the Biden administration actually fast-tracked the approval of a $735 million JDAM deal with Israel despite an unprecedented joint resolution of disapproval introduced by Rep. Alexandria Ocasio-Cortez and Sen. Bernie Sanders.

In addition, the Biden administration also restarted INCLE funding to the Palestinian Authority (PA), proposing $33 million in its FY2022 budget request (all US funding for Palestinians was cut off by the Trump administration). Official documents that were leaked to Al Jazeera show that the United States has recognized in the past that this funding enables PA torture of dissidents.

Explanation: President Biden’s failure to make good on his promise to limit the transfer of military weapons to domestic law enforcement agencies is dangerous and irresponsible. In the midst of protests that were met with further police brutality after the murder of George Floyd, then-candidate Biden proclaimed the government must “stop transferring weapons of war to police forces…. No more excuses. No more delays.” He was referring to the 1033 program, which authorizes the the Department of Defense to transfer surplus military equipment including rocket-launchers and armored vehicles to police departments around the country. Data shows that 1033 transfers lead to more police violence. President Obama had limited 1033 transfers through an executive order in 2015, which was rescinded by the Trump administration in 2017. Biden promised and was expected to reinstate the Obama-era policy but has yet to act. Amid Congressional gridlock on police reform and intense lobbying by police unions to block a 1033 policy change in the 2022 NDAA, Biden’s refusal to take administrative action against militarized policing endangers lives and our first amendment rights.

Explanation: President Biden came into office promising to revamp U.S. foreign policy towards the Middle East by centering U.S. diplomacy on human rights, democracy, and the rule of law. But after calling Egyptian President Abdel Fattah el-Sisi Trump’s “favorite dictator” and vowing to make Saudi Arabia “the pariah that they are,” Biden quickly retreated and resumed business as usual approaches to autocrats throughout the region. Nowhere was this resumption of the status quo more evident than in U.S. military assistance to authoritarian governments. In Egypt, the Biden administration authorized $170 million of a possible $300 million of military aid conditioned on human rights improvements even though the Egyptian government did not meet any of the conditions to receive this aid. This decision sidestepped Congressional intent to suspend military aid to Egypt until it addresses its ongoing human rights crisis, and Egypt already receives $1 billion in unconditioned military aid from the United States. In Saudi Arabia, Biden decided not to sanction Crown Prince Mohamed bin Salman for his role in the murder of Saudi journalist and U.S. resident Jamal Khashoggi, and instead approved a $650 million weapons deal to the Kingdom in November, despite the many reports concluding that Saudi forces have committed war crimes in Yemen, often with U.S. weapons. The administration also approved a massive $23 billion arms sale to the United Arab Emirates despite that country’s disastrous military intervention in Yemen. The UAE suspended discussions on this deal in December, which consists mostly of F-35 combat aircraft and armed drones, supposedly bristling against U.S. restrictions on the use of these weapons, but likely using this ploy as a bargaining tactic. In sum, these actions show the administration’s hypocrisy towards centering U.S. foreign policy on human rights and ending military assistance to authoritarian regimes, as well as its disregard for supporting democracy and the rule of law in the Middle East.

​Evaluator: John Hursh, Program Director, Democracy for the Arab World Now (DAWN) (guest contributor)
Assessment rubric
​
A: Excellent improvement of policy, making it a world-leading example.
B: Laudable improvement of policy, but still more to do.
C: No net change to pre-existing policy that was middle of the road.
D: Net decline to pre-existing middle-of-the-road policy or failure to improve dangerous pre-existing policy.
F: Failing grade. Policy changes are dangerous to international peace and security.