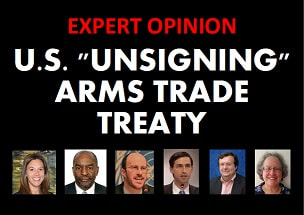 On April 26, 2019, President Trump told the audience at an National Rifle Association conference that he is directing the Senate to return the Arms Trade Treaty to him and that the United States will be revoking the effect of its signature to it. At the time, the treaty had 101 states parties and 34 signatories that had yet to ratify (inclusive of the U.S.). On July 18, the United States communicated to the UN that the US "...has no legal obligations arising from its signature..."

“President Trump’s decision to unsign the ATT is misguided and not consistent with U.S. national security or economic interests. The ATT was intended to prevent the irresponsible and illegal transfer of conventional arms to commit violations of human rights and international humanitarian law. By turning its back on multilateral diplomacy yet again, the United States is disregarding global norms and allowing nefarious actors to trade weapons with impunity. Walking away from a treaty that includes nearly all of the United States' closest allies and partners, the United States is instead choosing to be in the company of governments that routinely flout responsible transfer controls."

“This announcement is a misguided blow to efforts to promote international peace and security. The ATT is the first global instrument to set international standards for the transfer of conventional arms and ammunition with the express purpose of reducing human suffering. The treaty requires governments to assess the risk of violations of international human rights and humanitarian law before they authorize an arms deal in order to prevent weapons from being irresponsibly used in brutal conflicts, by organized crime or funneled to terrorists. It in no way interferes with the Second Amendment of the U.S. Constitution, which guarantees US’ citizens the right to bear arms.

“As the biggest arms exporter, the US signature to the ATT was an important step towards ensuring that dangerous weapons stay out of the wrong hands. With this announcement the Trump administration will re-open the floodgates for arms sales with weakened human rights criteria, which could potentially fuel brutal conflicts, and make everyone less safe.”

"At a time when we see conventional weapons falling into the hands of bad actors, un-signing the Arms Trade Treaty tells the world that the United States simply does not care how arms are misused by irresponsible nations, terrorists, and human rights abusers. Trump's previous refusal to consider halting arms sales to Saudi Arabia no matter how atrocious their behavior, and the introduction of an arms transfer policy that treats weapons as any other trade commodity, rather than the deadly machines they are, make this move unsurprising but no less tragic."

"President Trump’s decision to unsign the Arms Trade Treaty is just the latest example of his policy of putting narrow political gain before global security and human rights. He gave away the game when he unveiled his decision at the annual meeting of the National Rifle Association, an organization which has staunchly supported the president in exchange for his lax approach to preventing gun violence. The decision echoes his administration’s approach to arms sales to Saudi Arabia, where exaggerated claims of U.S. jobs have been used to justify continued arms supplies to a nation that is responsible for an ongoing humanitarian catastrophe in Yemen."

“This is appalling. The US government is sending the message that it should be easier for terrorists, war criminals, gangs, poachers, human rights abusers and those engaged in gender-based violence to get weapons. Shameful.”

“President Trump is pandering to the National Rifle Association again. His announcement that the United States is 'unsigning' the Arms Trade Treaty is yet another example of this administration’s abdication of responsibility in the arms control sphere.

"The US government regularly claims to have the strongest global standards for arms transfers. Yet it seeks to abandon the only legally binding treaty that addresses these issues. This decision may seem as though it’s a symbolic step, because the Trump Administration had already made clear its lack of support for the treaty. But this act has substantive implications as well.  It’s in the US interest to be part of the ATT and to work with other countries to improve their standards for importing and exporting weapons.  ‘Unsigning’ the ATT decreases our leverage with these countries. ‘Do as I say, not as I do’ is a cynical and unpersuasive policy approach."
Additional responses by organizations with Forum-listed experts, but not by those experts themselves, include statements by:

*  Inclusion on the Forum on the Arms Trade expert list does not indicate agreement with or endorsement of the opinions of others. Institutional affiliation is indicated for identification purposes only. Please contact experts directly for further comments.