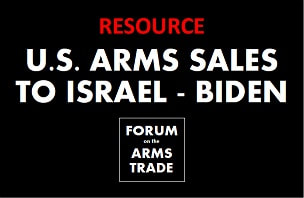 This resource page details developments related to a May 5 notification by the Biden administration to Congress of a possible direct commercial sale of $735 million in precision-guided weapons to Israel, which became controversial as fighting in Israel intensified and the notification became more broadly public around May 17. Congress has 15 days to pass joint resolutions barring the administration from issuing contracts to such sales, but could at any point pass legislation blocking them before delivery. The narrative below generally follows in chronological order, with most recent updates near the top.

On June 8, a diverse group of more than 100 organizations sent a letter to President Biden urging him to halt the sale (see also press release).

According to news reports on May 25, licenses for these sales were granted by the State Department on May 21. Votes are not expected now on the resolutions of disapproval.

On May 25, Senator Ted Cruz introduced a resolution of approval for the sales, with 6 initial co-sponsors (S.Res. 237).

On May 19, Representatives Alexandria Ocasio-Cortez, Mark Pocan, and Rashida Tlaib announced the introduction of a House resolution opposing the sale (with twelve additional initial co-sponsors), endorsed by dozens of organizations (see H.J.Res 49). On May 20, Senator Bernie Sanders introduced the resolution in the Senate (see S.J.Res 19).

On May 17, news broke that the Biden administration had notified Congress of the potential direct commercial sale of $735 million weapons to Israel on May 5 for Joint Direct Attack Munition variants and Small Diameter Bomb Increment I variants for end use by the Ministry of Defense for Israel (license document DDTC 20-084 - not available publicly). In the interim between May 5-17, fighting in Israel had intensified, with a great deal of attention and concerned placed on the actions of Israeli forces.

While for sales to most countries, Congress has 30 days from formal notification to pass joint resolutions of disapproval that bar the President from concluding sales, for NATO member states, NATO, Japan, Australia, South Korea, Israel, and New Zealand that timeline is 15 days. However, at any point until delivery, Congress can pass legislation blocking arms sales. (See CRS resource.)

According to a new fact sheet from the Security Assistance Monitor, since fiscal year 2001, Israel has received more than $63 billion in U.S. security assistance, with over 90% funded by the State Department's Foreign Military Financing program. ​(Note: it does not appear, but is unclear, whether FMF funding is being used in this instance.)

Government (Biden administration)​
Congress
​Civil Society ​
last updated June 8, 2021
EXPERT RESPONSES
Forum on the Arms Trade-listed experts* provided the following public comments on this topic. Please contact experts directly for further comments:  ​
Josh Ruebner  Adjunct Lecturer, Georgetown University - May 20, 2021
​*  Inclusion on the Forum on the Arms Trade expert list does not indicate agreement with or endorsement of the opinions of others. Institutional affiliation is indicated for identification purposes only. Please contact experts directly for further comments.