On December 2, to mark the 25th anniversary of the Mine Ban Treaty, the White House issued a statement.

On June 21, the Biden administration release a new landmine policy to not use anti-personnel landmines outside of the Korean peninsula. The policy also bans the transfer, development, production or acquisition of anti-personnel landmines. It says the United States will "Not assist, encourage, or induce anyone, outside of the context of the Korean Peninsula, to engage in any activity that would be prohibited by the Ottawa Convention" [aka Mine Ban Treaty]. This policy closely matches that of the Obama administration.  (See also press briefing, June 21 and Congressional Research Service "In Focus," updated Sept 28, 2022.)

In a speech May 26, Under Secretary of State for Arms Control and International Security Bonnie Jenkins said "a White House-led policy review on the use of anti-personnel landmines... is comprehensive and ongoing."

Not directly related to landmine policy, but important, on April 22, a group of 27 Democratic members of the House of Representatives sent a letter to President Biden urging him "to take all the necessary steps to join the Convention on Cluster Munitions."

On April 7, Senator Patrick Leahy (D-Vermont) issued a statement on Russia's use of landmines in Ukraine, reiterating his longstanding calls for the United States to join the Mine Ban Treaty, and arguing that doing so "would greatly enhance our credibility to call out their use of mines." This followed after an April 1 statement from the U.S. Campaign to Ban Landmines that made similar points.

On January 31, 2022,  the second anniversary of the current U.S. landmine policy, U.S. Campaign to Ban Landmines sent a letter to President Biden calling for action on landmine policy.

On June 22, a bipartisan bicameral letter was sent to President Biden encouraging him to reverse Trump landmine policy and put "the United States on a definitive path to accede to the [Mine Ban] treaty."

On April 6, 2021, Department of Defense spokesperson Mike Howard stated that U.S. landmine policy remained unchanged and that antipersonnel landmines remain vital to the country. Follow up messages indicated that review was ongoing (see Pentagon press briefing transcript). On April 8, U.S. Ambassador to the United Nations Linda Thomas-Greenfield said "President Biden has been clear that he intends to roll back this policy, and our administration has begun a policy review to do just that." During this period, the US Campaign to Ban Landmines issued a statement calling for the President to reject landmines. Additional reactions included: Amnesty International (quoting Adotei Akwei) and the Center for Civilians in Conflict, as well as Senator Leahy.

During the 2020 campaign, candidate Joe Biden's team indicated that he would rollback the Trump era policy, which allowed for global use of landmines and rejected joining the Mine Ban Treaty.

Forum on the Arms Trade-listed experts* have provided the following public comments on this topic. Please contact experts directly for further comments:  ​

“I have spent almost two decades studying landmines, working and researching in Afghanistan, Bosnia, Cambodia, Croatia, Iraq, Laos, South Sudan, Sudan, Thailand and Vietnam. Trump’s overturning of the US’s humanitarian restrictions on landmines was a deregulation of cruelty. Landmines serve no legitimate military function. The vast majority of casualties are civilian, often decades later. Don’t believe the marketing claims of arms companies that profit from automated killing. Supposedly 'self-destructing' or 'self-neutralizing' mines have to be treated as live by deminers and so are just as expensive to remove. It is time for the new administration to reclaim America’s moral leadership – it was the first government to call for a prohibition of landmines – and join the ban treaty.”
*  Inclusion on the Forum on the Arms Trade expert list does not indicate agreement with or endorsement of the opinions of others. Institutional affiliation is indicated for identification purposes only. Please contact experts directly for further comments. 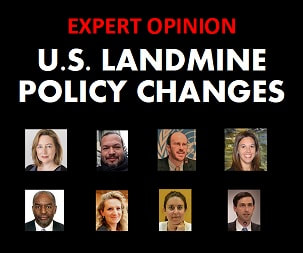 ARCHIVED INFORMATION BELOW - PRE 2021 -- some links may no longer work due to the change in U.S. administration

News broke (CNN, Vox) on January 30, 2020, about changes in US landmine policy. Despite a request from Senator Leahy (press statement), asking for a delay, the White House issued a statement on January 31 announcing the change and the Department of Defense released additional details. More than 60 civil society organizations issued a joint statement condemning new U.S. policy (pdf, press release -- updated Feb 28). On May 6, more than 100 members of Congress sent a letter to Secretary of Defense Esper expressing disappointment in new U.S. landmine policy and seeking answers to questions on the justification for the reversal and future plans. (See response from the Defense Department in resource below.) On October 26, the US Campaign to Ban Landmines issued a memo for the president elected in 2020, calling for a policy reversal. The International Campaign to Ban Landmines echoed this on November 10, specifically addressing a future Biden administration.

The new policy rejects Obama-era policy that allowed for possible use of landmines only in the Korean peninsula, with no further use or production, and the goal of joining the Mine Ban Treaty. (See Landmine Monitor profile.) The new policy removes that geographic restriction and allows for the use upon the authority of Combatant Commanders of "advanced, non-persistent landmines" that "will be designed and constructed to self-destruct in 30 days or less after emplacement and will possess a back-up self-deactivation feature."
Key Resources

"“This announcement flies in the face of 20 plus years of progress towards eliminating the human suffering caused by landmines and comes just weeks after most of the countries in the world recommitted to achieving a mine-free world by 2025, at the Fourth Review Conference of the Mine Ban Treaty. Regardless of the US position, the international community will continue its work to eliminate these terrible weapons.”

"The new policy relies on antipersonnel mines equipped with self-destruction mechanisms and self-deactivation features, yet the Mine Ban Treaty makes no such distinction. It comprehensively prohibits all types of victim-activated devices regardless of their method of manufacture or predicted longevity. Even mines that are designed to self-destruct or deactivate are no better able to distinguish civilian from combatant.

The new policy follows the U.S. retreat from multilateralism and its dismissal of several arms agreements."

"The reversal of landmine policy is another example of the United States turning its back on international norms, being out of step with its allies, and needlessly putting civilians at risk. Although the policy commits to trying to minimize civilian casualties, the nature of these weapons makes that commitment hollow. The characterization of mines as non-persistent is artificial, as there have been and will inevitably be failures in the technology."
​
​

"The world has rejected landmines because they are indiscriminate and disproportionately harm civilians, who make up the vast majority of landmine casualties. Technical solutions to make landmines self-destruct or otherwise labeled as ‘smart’ have failed to work as advertised and been rejected by the 164 counties, including all U.S. NATO allies, that have joined the Mine Ban Treaty.

This dreadful policy decision is another dangerous change for this administration that further withdraws the United States from the global norm. This follows earlier steps such as making it easier to use cluster munitions, contrary to the Convention on Cluster Munitions, and ending support for the Arms Trade Treaty -- both treaties widely backed by US allies.

​The world has moved on from the use of landmines. The United States should too."

"There is a reason why the use of antipersonnel landmines is illegal: they can’t distinguish between fighters and ordinary people, and often continue to kill and maim for years after conflicts end.

This decision is consistent with an administration that has proven itself indifferent to human lives and suffering by withdrawing from the global Arms Trade Treaty and more recently by easing oversight of US arms exports. It shows that the Trump administration is either ignorant of or unconcerned with the consequences of driving the world towards more irresponsible arms exports and inhumane weapons like landmines."

"Don’t be fooled. Everything that man creates has a failure rate. What happens if they don’t neutralize as intended? Our teams see, first hand, how weapons often marketed as 'self destructing' continue to injure, maim, and terrorize civilians all over the world on a daily basis. The idea that so-called 'advanced' landmines will be safer than older types of devices, is absurd. Who will explain these devices and their unknown fail rates to the parents of children killed while playing or walking to school?

The U.S. claims that the protection of civilians is at the core of their defense policy, For the last four decades, Humanity & Inclusion has been documenting the indiscriminate effects of landmines on civilians. This announced setback on landmines is thus in contradiction with existing U.S. policy.”

“The myth of advanced non-persistent landmines reducing casualties is just that a myth. The problem with landmines is their indiscriminate nature whether they are indiscriminate for a month or a decade is not important.

​The Ottawa Treaty is a success in progress. The Trump administration’s policy is a step backwards but Canada has an opportunity to take two steps forward and finish the job we started in 1997.”

“Overturning restrictions on landmines amounts to a deregulation of cruelty. I have spent almost two decades studying landmines, working and researching in Afghanistan, Bosnia, Cambodia, Croatia, Iraq, Laos, South Sudan, Sudan, Thailand and Vietnam. Landmines serve no legitimate military function. The vast majority of casualties are civilian, often decades later. Don’t believe the marketing claims of arms companies that profit from automated killing. Supposedly 'self-destructing' or 'self-neutralizing' mines have to be treated as live by deminers and so are just as expensive to remove. It is time for the United States to reclaim its moral leadership – it was the first government to call for a prohibition of landmines – and join the ban treaty.”
Additional responses by organizations with Forum-listed experts, but not by those experts themselves, as well as by other organizations:

National ​civil society statements
*  Inclusion on the Forum on the Arms Trade expert list does not indicate agreement with or endorsement of the opinions of others. Institutional affiliation is indicated for identification purposes only. Please contact experts directly for further comments.