Under U.S. law, Congress must be notified of certain potential arms exports when their value reaches a minimum threshold. There are, however, arms exports that fail to meet that threshold, and it is very difficult to assess the number and amount of such "under threshold" transfers. There is evidence, however, that the value of U.S. weapons delivered internationally that were not notified to Congress beforehand is in the tens of billions, creating a transparency and public knowledge challenge in understanding U.S. arms trade practice and its impact.

This page is meant to be a resource for sharing an understanding of law and practices, case studies, potential research avenues into under threshold arms exports, and a variety of recommendations. We welcome additional information and suggestions, which can be sent to info@ForumArmsTrade.org or added via the comment section below.

Forum-listed experts* to contact on this research includes: Elias Yousif, Seth Binder, Jeff Abramson
Other recommended experts include: Lillian Mauldin
​
* The Forum itself does not take positions, but does share findings, research, and recommendations by its listed experts and others addressing arms trade transparency. Inclusion on the Forum on the Arms Trade expert list does not indicate agreement with or endorsement of the opinions of others. Please contact experts directly for comments.
Current Law and Reporting- Foreign Military Sales (FMS) and Direct Commercial Sales (DCS)

​The Foreign Assistance Act (FAA) and the Arms Export Control Act (AECA) collectively outline acceptable reasons for the U.S. government to transfer arms and weapons internationally. The AECA, in particular, governs key processes for both Foreign Military Sales (FMS - which are negotiated government-to-government) and Direct Commercial Sales (DCS -  which are negotiated between U.S. weapons manufacturers and international clients) -- distinctions between which contribute to transparency issues around arms transfers.

For both FMS and DCS, the AECA requires the U.S. Executive branch to notify Congress of potential weapons and arms transfers when they meet minimum thresholds before they can proceed with letters of offer and acceptance (LOAs - for FMS) or licenses (for DCS). For countries that are not NATO members, NATO, Japan, Australia, South Korea, Israel, or New Zealand, these thresholds are:  Thresholds and the notification periods for the NATO+ countries are different, but do exist.

Functionally, the public is most aware of FMS notifications because they are put online on a website managed by the Defense Security Cooperation Agency (DSCA - see also related resource). There is no similar public transparency in the notification stage for DCS, and information when it does become available is much more limited. The value of sales and licenses, however, typically changes after the notification stage, adding to the challenge of identifying under threshold transfers.

The primary reporting mechanism for FMS is the annual Defense Security Cooperation Agency's (DSCA) Historical Sales Book. This document provides aggregate data on FMS from fiscal year 1950 through a set fiscal year, with individual year values given for the five most recent fiscal  years. (The most current report is through FY 2020.) Since FY2015, the report in general defines a sale at the point when letters of offer and acceptance (LOAs) are signed and initial deposits from the recipient countries are submitted. This data includes sales that are both above and below congressional reporting thresholds, but does not separate those values.

Because this data is only published once a year, only provides aggregated total value, and is from the LOA stage, it is very difficult to determine the value of under threshold agreements. This also does not capture actual deliveries, which often occur years after LOAs are agreed and may not be at the same value as those LOAs.

While members of Congress receive more details, DCS notifications to Congress are publicly published quarterly in the Federal Register, generally indicating simply that a license has been proposed at the threshold value, but not indicating actual value nor revealing contractors, using boiler plate language explaining that the more detailed notification "contains business information submitted to the Department of State by the applicant, publication of which could cause competitive harm to the U.S. firm concerned" (see example).

The primary public annual transparency report that provides actual values is the so-called 655 report published by the State Department, named after requirements of Section 655(b)(3) of the FAA. The report specifies the quantity of defense articles  and defense services authorized to each foreign country by U.S. Munitions List category as well as a single overall total dollar value of all shipments that were authorized and exported during the fiscal year to each destination. This data appears to include transfers that are both above and below congressional reporting thresholds, but does not separate those values.

Because this data is only published once a year and only provides an aggregated total value, it is very difficult to determine the value of under threshold agreements.

In the past, the Congressional Research Service would publish an annual report on arms sales and would simply not even include DCS numbers because licenses were typically valid for four years and nearly impossible to track in detail. DCS, however, appears to be an increasingly important part of overall U.S. arms transfers, making the lack of transparency in possible under threshold sales even more concerning.

Absent that CRS report, media often cite an annual State Department factsheet that reports FMS notifications and FMS implementation, and DCS licenses. The January 2021 factsheet (below) indicates that $124.3 billion in DCS licenses were approved in FY 2020, compared to $87.6 billion in FMS notifications. It is unclear how under threshold sales are included in these figures. (Further government clarification would be helpful here. It is possible that the data is revealing for DCS that of $124.3 billion in licenses in fiscal year 2020, only $38.5 billion of these licenses were notified to Congress. While not all licenses typically result in deliveries, the potential under threshold DCS transfers could be $84.8 billion if these licenses were fully completed in the future.)

​​Beginning around 2011, an effort to reform arms trade policy resulted in eight major rounds of removal of items from the U.S. Munitions List -- which are at the heart of FMS and DCS procedures -- and transfer to the Commerce Control List. Some Congressional notification requirements were carried over during this process, but the eighth round, completed during the Trump administration, transferred many items from the first and third categories of the USML to the CCL without including any Congressional notification requirements. Weapons in those categories include semi-automatic and non-automatic firearms and their ammunition (see resource page).

According to the most recent information from the Commerce Department's Bureau of Industry and Security (BIS), nearly $15.7 billion in licenses have been approved and $961.7 million in weapons have been shipped in this eight category between March 9, 2020 and June 30, 2021.

Office of the Inspector General Department of State Report - 2020 -- $11.2 billion in under threshold transfers

​In August 2020, the Office of the Inspector General (OIG) of the Department of State issued a report (non-redacted version) regarding the Secretary of State’s May 2019 certification of emergency under the AECA. This “emergency certification waived congressional review requirements for 22 arms transfer cases to the Kingdom of Saudi Arabia, the United Arab Emirates, and the Hashemite Kingdom of Jordan, with a total value of approximately $8.1 billion.” While the OIG found that no laws were broken, it noted that that risks were not thoroughly assessed for this certification and that the prevention of civilian casualties was not taken into complete consideration. Additionally, the OIG found that:

Indications that the State Department approved 4,221 and made $11.2 billion of under threshold transfers in this instance, including those related to weapons for which Congress was acting to hold sales about which it was notified, bely the need for greater transparency into under threshold transfers.
​
Firearms that have been transferred to the Commerce Control List since March 2020, Bureau of Industry and Security (BIS) reporting -- $15.7 billion in licenses approved, $961.7 million delivered

Beginning in March 2020, many firearms (semi-automatic and non-automatic) and their ammunition were transferred to new 500 series categories in the Commerce Control List, removing them from the $1 million Congressional notification threshold required when they were on the first and third categories of the U.S. Munitions List. Therefore, any licenses issues that result in transfers under this new process will have been done without prior notification.

According to the most recent information from the Commerce Department's Bureau of Industry and Security (BIS), nearly $15.7 billion in licenses have been approved and $961.7 million in weapons have been shipped in this category between March 9, 2020 and June 30, 2021. 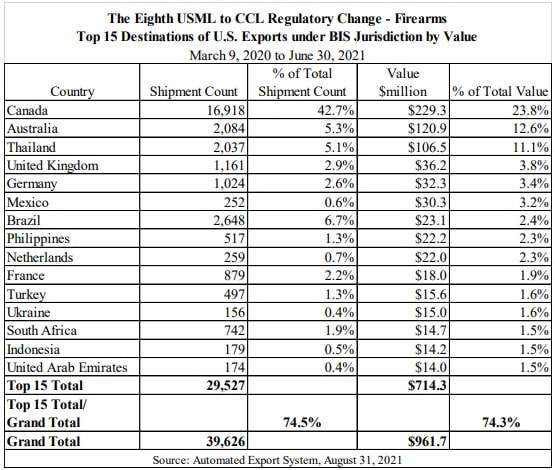 Note 1: Many of these deliveries may have been previously notified to Congress if their licenses were approved prior to March 2020. As time proceeds, we anticipate that more and more of these shipments will have been licensed without any Congressional notification.

Note 2: While it is possible some of the items included in this reporting still retain some notification (if they were in the original category II of the USML), it appears that these are most likely all from categories I and III and therefore are not notified to Congress prior to licensing.
​
Javelin missiles for Lithuania -- $28.23 million

A December 21, 2021, $125 million foreign military sales (FMS) notification to Congress of Javelin missiles for Lithuania  provided a rare example of an FMS case that was originally below notification threshold (emphasis added).

A number of research approaches could be taken to better identify and understand the sources and extent of U.S. arms transfers that are not notified to Congress, whether under threshold or more broadly done via processes that require no notification at all. Some of these approaches, briefly, could include:
There are also a variety of potential approaches to address concerns about the lack of transparency related to arms transfers that are below Congressional notification thresholds, some of which have been introduced in Congressional legislation. A short like of possible recommendations is below:
​
See also

Please go to this blog post to leave a comment and see/reply to what others are suggesting about this research. ​