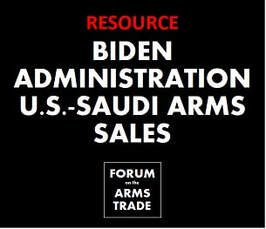 This resource page details developments related to actual and potential arms sales under the Biden administration to Saudi Arabia, which again received scrutiny in October 2022 after it was announced that OPEC would cut oil production. President Biden visited Saudi Arabia in July with an expectation that the visit would lead to greater oil flows, to help reduce the impact of the war in Ukraine. To date, more than $4 billion worth of weapons and services have been notified to Congress for potential sale to Saudi Arabia.

This page will continue to be updated. If you have suggested information or resources to add to it, please email info@forumarmstrade.org.  Timeline below. Jump to resources.

October 13: In a tweet thread, Senator Murphy (D-Conn) suggested that some U.S. weapons in Saudi Arabia (Patriot missile batteries) or headed there (AMRAAMs) should be sent to Ukraine instead, or other allies supporting Ukraine. (See also Senator Blumenthal tweet on Oct. 14.)

October 10: Senator Bob Menendez (D-NJ), chair of the Senate Foreign Relations Committee, said the "United States must immediately freeze all aspects of our cooperation with Saudi Arabia, including any arms sales and security cooperation beyond what is absolutely necessary to defend U.S. personnel and interests."

October 9: Sen. Richard Blumenthal and Rep. Ro Khanna ​said in an editorial that they will introduce legislation on October 11 "that will immediately halt all U.S. arms sales to Saudi Arabia." The bill calls for a one-year halt. (See update Oct 11, including text. See H.R.9181, and S.5074)

October 5: OPEC Plus, including Saudi Arabia and Russia, agreed to reduce oil production (see decision and media reporting), sparking many to call for a re-envisioning of the U.S.-Saudi relationship. Democratic Representatives Tom Malinowski (NJ), Sean Casten (IL), and Susan Wild (PA) announced they would introduce a bill that would mandate the removal of U.S. troops and missile defense systems from Saudi Arabia and the UAE. See H.R. 9168 (text)

August 4: Senator Rand Paul (R-Kentucky) introduced a resolution of disapproval (S.J.Res 58) on the August 2 proposed sale. (Update: no vote was taken on the resolution.)

August 2: The Biden administration notified Congress of a potential $3.05 billion arms sale to Saudi Arabia, including for 300 Patriot missiles.

July 9: Prior to his trip to Saudi Arabia, President Biden authored an editorial in the Washington Post describing his reasons for the visit, saying his "...views on human rights are clear and long-standing, and fundamental freedoms are always on the agenda when I travel abroad..."

April 2: Truce in Yemen begins. (Update: after being renewed twice, it expired October 2.)

December 7: the Senate voted 30-67, deciding not to discharge S.J.Res.31 from the Senate Foreign Relations Committee, meaning that the Senate did not accept the resolution of disapproval on a possible $650 million foreign military sale to Saudi Arabia.

November 17: the Biden administration announced via a Statement of Administration Policy that it would be opposing an amendment in the FY 2022 National Defense Authorization Act prohibiting U.S. support for the Saudi-led war in Yemen, calling the amendment "unnecessary" given its cessation of "support for Saudi-led coalition offensive operations in Yemen."

November 10: a number of Democratic members of the House issued a statement on the sale, calling for a halt to logistical support and spare parts to Saudi Arabia.

May 19: Senator Warren and 15 other Senators sent a letter to President Biden, with the request that he "leverage all influence and tools available, including the potential impact on pending weapons sales, U.S.-Saudi military cooperation, and U.S.-Saudi ties more broadly, to demand that Saudi Arabia immediately and unconditionally stop the use of blockade tactics" in relation to Yemen (emphasis added -- not in original letter)

April 21: At a hearing, Senator Murphy expressed concerns about UAE and other sales, the same day the House of Representatives passed the Protection of Saudi Dissidents Act by a vote of 350-71 (first re-introduced on Feb. 26), which could put limits on sales to Saudi Arabia.

February 26: After the release of a report on the murder of Jamal Khashoggi, members of the House introduced legislation to stop arms sales to Saudi Arabia. On March 2, 42 organizations included a similar recommendation in a broad reaching response.

February 25: 41 members of the House, endorsed by many civil society organizations, issued a letter to President Biden asking for clarity on weapons sales to Saudi Arabia and the UAE, expressing their "strong support for your decision to end U.S. participation in offensive operations in the Saudi/UAE-led war in Yemen, as well as related weapons sales..."

February 11: More than 75 organizations and experts issued a letter detailing $36.5 billion in arms sales and services to Saudi Arabia and the United Arab Emirates that they believe should be consider relevant to "offensive operations" and permanently stopped. (See related Foreign Policy exclusive.)

February 4: President Biden announced the end of "all American support for offensive operations in the war in Yemen, including relevant arms sales." (More information is still needed to clarify what this means for some specific sales, including to the United Arab Emirates, but includes precision guided munitions to Saudi Arabia according to Jake Sullivan during a press conference earlier in the day.)

January 27: Secretary of State Blinken indicated that the State Department was reviewing arms sales, responding to a press question by saying that "Generally speaking when it comes to arms sales, it is typical at the start of an administration to review any – any pending sales, to make sure that what is being considered is something that advances our strategic objectives and advances our foreign policy. So that’s – that’s what we’re doing at this moment.."

This was separately and widely reported as including review of recent controversial arms sales to Saudi Arabia and the UAE:

Government (Biden administration)​
Congress​
​Civil Society
​*  Inclusion on the Forum on the Arms Trade expert list, or listing here of other experts, does not indicate agreement with or endorsement of the opinions of others.