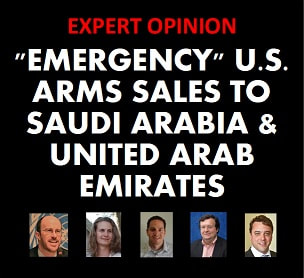 On May 24, 2019, U.S. Secretary of State Michael Pompeo announced that he was using a provision of the 1976 Arms Export Control Act (AECA) to facilitate several pending arms sales to Saudi Arabia, the United Arab Emirates, and Jordan.

Under the AECA, Congress would normally have 30 days to review such sales once made public before the administration could finalize them, but a number of emergency powers are available to override that process, although rather rarely used (see CRS on notification process and CRS on emergency examples).

During the spring and summer of 2019, Congress successfully passed  resolutions halting the sales. However, President Trump vetoed them, and Congress was unable to overturn his veto on July 29.

July 11, 2019: The House added the Lieu amendment to the National Defense Authorization Act by a 246 to 180 vote, which prohibits funds from being used to transfer any defense articles or services to Saudi Arabia or the United Arab Emirates under the emergency authority of the Arms Export Control Act that circumvents congressional review.

July 10, 2019: The Senate Foreign Relations Committee held a hearing on this topic.

June 18, 2019: Senator Menendez began the process to use privileged authorities to block some of the sales, in particular to move S.J. Res 36 forward, which addresses co-production of components for Paveway precision-guided munitions and the transfer of up to 64,603 additional kits, partial kits, and full-up-rounds.

June 12, 2019: The co-production agreement was one of many topics discussed at a June 12 hearing held by the House Foreign Affairs Committee.

June 11, 2019: Bloomberg reported that with the addition of Mike Lee as a co-sponsor, if all Democrats voted for the resolutions with the 3 original Republican co-sponsors, then the Senate would have a majority to debate the resolutions.

​June 7, 2019: The New York Times reported that the expedited sales include production agreements for certain work to be done in Saudi Arabia.

June 5, 2019: A bipartisan group of Senators announced they would introduce 22 resolutions (see list) to block President Trump's 22 emergency sales of arms to Jordan, the United Arab Emirates, and Saudi Arabia.

May 24, 2019: Following upon tweets by Senator Chris Murphy two days earlier, Secretary of State Michael Pompeo confirmed that "I made a determination pursuant to section 36 of the Arms Export Control Act and directed the Department to complete immediately the formal notification of 22 pending arms transfers to Jordan, the United Arab Emirates, and Saudi Arabia totaling approximately $8.1 billion to deter Iranian aggression and build partner self-defense capacity." Senator Robert Menendez (ranking member of the Senate Foreign Relations Committee) issued a statement saying, "The unprecedented and legally dubious move breaks a long-standing process designed to ensure that Congress is able to review and disapprove arms sales.that the president." In 2018, Menendez placed a sale of precision-guided munitions to Saudi Arabia and the UAE on hold. ​​​
Resources
Civil Society
US Government
Congress
Forum Resource Pages ​
Forum Experts
Forum on the Arms Trade-listed experts* provided the following public comments (May 23, 2019) on this topic. Please contact experts directly for further comments:

“In his dealings with Riyadh, and more broadly in his revised conventional arms transfer policy, President Trump has made clear his desire to sell more weapons, more quickly, often without proper concern for human rights or wise restraint. His expected use of emergency powers to sell weapons to Saudi Arabia without Congressional approval is dangerous, but not surprising. All parties to the conflict in Yemen have abused weapons to the detriment of civilians there. Adding more U.S. weapons into the mix promises to further the humanitarian crisis in Yemen and undermines U.S. leverage to promote peace. Trump should not take this step.
​
“Congress can and should act on U.S. involvement in the war in Yemen, as it is increasingly doing by passing War Powers resolutions and taking other steps. In this case, the chair and ranking members of the Senate Foreign Relations Committee or House Foreign Affairs Committee can invoke their seldom used authority to demand a pre-delivery notification before any weapons are transferred to Saudi Arabia. Congress should also immediately consider measures to halt arms deliveries to Saudi Arabia and other countries that have already demonstrated a record of misusing them in Yemen."

Brittany Benowitz   Independent expert​
​
“Further sales of weapons previously used in unlawful strikes, including in particular precision guided munitions, would violate the United States obligations under the Geneva Conventions and likely federal law.  Eight of the ten strikes identified by UN experts as unlawful in 2017 involved precision guided munitions. Contrary to the misconception that these weapons reduce civilian casualties, the record shows that it was only after the Obama administration suspended their sale that the unlawful strikes on civilian casualties went down.”

“If the administration carries through with reports that it will use an emergency waiver on an arms sale to Saudi Arabia, this would be an alarming step to bypass the traditional congressional review period with little justification, which should elicit a strong response from Congress who could pass legislation to stop the delivery and transfer of arms to Saudi Arabia.”

“The Trump administration's plan to circumvent Congress and push through a sale of bombs to Saudi Arabia on an "emergency" must be stopped. As recent press reports have noted, indiscriminate Saudi bombing of civilian targets in Yemen continues unabated, increasing a death toll that has left thousands of Yemenis dead or wounded.  If the Trump administration moves forward with this evasive maneuver, Congress should enact legislation to bar all arms sales to the Saudi regime.” ​
​
​See also "Trump's 'Emergency' Sale to Saudi Arabia Must Not Stand" Lobelog, May 24, 2019 and "It's Time To Stop Arms Sales To Saudi Arabia," Lobelog, May 15, 2019.

“In practice, the US government faces precious few hurdles in selling large numbers of conventional weapons as it is. The US already sells more weapons than any other country in the world, and quite often to the countries involved in, or deeply affected by war. Through the notification process, Congress can serve as the last failsafe for preventing - or at least properly scrutinizing - high risk sales that clearly represent a significant risk of escalating a conflict, exacerbating a humanitarian disaster, and almost certainly causing the death of even more civilians. For the administration to bypass the most basic of safeguards, on the pretext of a security emergency, when the only emergency is that which exists for civilians on the ground in Yemen, not only sends a troubling signal of indifference to human life, but also sets a very dangerous precedent of indifference to Congressional oversight.” [updated 11AM, May 23]
​Also available for media comments

See also "An 'Emergency' Arms Deal: Will Congress Acquiesce in Another Blow to Its Authority?" Just Security, June 6, 2019.
*  Inclusion on the Forum on the Arms Trade expert list does not indicate agreement with or endorsement of the opinions of others. Institutional affiliation is indicated for identification purposes only. Please contact experts directly for further comments.