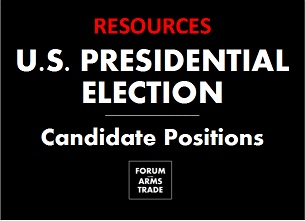 Given the central role of the United States, the 2020 U.S. presidential election promises to have a significant impact on all the issues tracked by the Forum on the Arms Trade. This resource outlines and analyzes the positions of the Republican and Democratic candidates -- now nominees --  on selected topics (at one time tracking more than 20 candidates). Until the election occurs, this effort will be a work in progress, and we welcome feedback and additional information on candidates positions, which can be sent to to info@ForumArmsTrade.org. (See also "Methodology" at the end of this page.) Assessments here are not endorsed by Forum experts nor the candidates.
Arms Sales to Saudi Coalition
The role of American and other Western arms in the war currently being waged by a Saudi-led coalition in Yemen has become arguably the foremost arms trade policy issue of 2019, as the situation there is considered one of the world's largest humanitarian crises. Repeated conflict between the executive and legislative branches of the U.S. government over arms sales to the Saudis, as well as direct U.S. military involvement in the war, has resulted in a number of vetoes (War Powers, Emergency Sales) and brought into question the extent of Presidential authority.

Arms Trade Treaty
The Arms Trade Treaty is the first global accord to regulate nearly all conventional weapons, requiring states to consider multiple criteria in making arms transfer decisions. It entered into force on December 24, 2014, and today has 110 states parties and 31 signatories. The United States signed the treaty on September 25, 2013. However, it was never ratified and was symbolically withdrawn from Senate consideration by President Donald Trump on April 26, 2019.

Firearms Export Oversight
In 2018, the Trump administration proposed new rules allowing for semiautomatic weapons, ammunition, and other firearms commercially available in the United States to be moved from the U.S. Munitions List (USML) overseen by the Department of State, where sales of more than $1 million are subject to Congressional scrutiny, to the Commerce Control List (CCL) overseen by the Department of Commerce, where there is no such requirement. The new rules were published on January 2020 and went into effect in March.

Mine Ban Treaty
On January 31, 2020, the White House issued a statement announcing a new landmine policy (see resource page). That policy rejects Obama-era policy that allowed for possible use of landmines only in the Korean peninsula, with no further use or production, and the goal of joining the Mine Ban Treaty. The new policy removes that geographic restriction and allows for the use upon the authority of Combatant Commanders of "advanced, non-persistent landmines" that "will be designed and constructed to self-destruct in 30 days or less after emplacement and will possess a back-up self-deactivation feature." The Mine Ban Treaty bans the use, production, and transfer of victim-activated anti-personnel landmines, and currently has 164 states parties, including all NATO members aside from the United States.

Click on each nominee's name for more information.
METHODOLOGY
​
For this resource, candidates are sorted first based on party affiliation, then from top to bottom by approximate standing in recent polls. In many cases, candidates have not made explicit statements about the topics tracked by the Forum on the Arms Trade. In describing the positions of candidates, great effort is put into directly linking to relevant statements, interviews, debates, campaign websites, past votes (where relevant), and other documented sources so that readers may reference them directly.

The category "unknown" is used in cases where a candidate has not issued an explicit statement on a topic, whether or not they appear likely to support a policy. Nonetheless, pertinent comments short of outright support, as well as other materials, are included in the resource page on each candidate in order to give an indication of possible positions.

This resource, originally launched in November 2019, will be continually updated until the election. We welcome feedback and other information (please contact us via email).

Jeff Abramson manages the project and consults with Forum-listed experts. The Forum on the Arms Trade does not itself take positions or endorse any candidate for political office. Assessments here are not necessarily endorsed by Forum-listed experts nor the candidates (unless specifically stated).