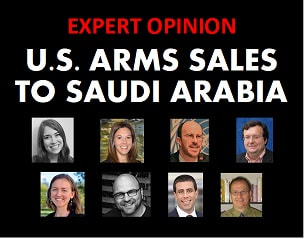 The death of journalist Jamal Khashoggi at the Saudi consulate in Turkey, and U.S. President Trump's statements that the U.S. would not reconsider arms sales to Riyadh, has drawn renewed national and global attention to the arming of Saudi Arabia.

"Trump put a price tag on Jamal Khashoggi’s life by saying he wouldn’t stop arms sales because of the claimed economic benefits to the United States. The reality is Trump’s blank check approach to the U.S.-Saudi alliance enabled Khashoggi’s apparent murder and the continued slaughter of civilians in Yemen. It should surprise no one that Trump is unwilling to use the United States’ leverage in arms sales to impose costs on Saudi Arabia’s abhorrent behavior inside the Kingdom and across the region."

​"When do principles matter more than profits? For far too long, the United States has continued to provide arms to Saudi Arabia as they have persecuted a devastating war in Yemen, killing thousands of innocent civilians. Our short term interests cannot replace core U.S. values and principles dedicated to protecting of life and human rights, which serve long-term interests and protect civilians."

"President Trump continues to willfully and dangerously choose suspect economic considerations above other priorities in arms sales. His administration should have long ago decided to hold arms transfers to Saudi Arabia given the Kingdom's misuse of those weapons in targeting civilians and civilian infrastructure in Yemen, exacerbating the dire humanitarian crisis there. Trump should now take advantage of even more widespread concern about Saudi behavior to suspend arms sales.

Weapons are killing machines and should not be treated as other trade commodities. The United States and the world is better served by a much more responsible U.S. arms trade approach; one that rightfully values promoting security and human rights."

"President Trump's claims about the economic benefits of arms sales to Saudi Arabia are greatly exaggerated.  Signed commitments so far are around $14 billion, a small fraction of the $110 billion "deal" he claims to have struck.  In fact, the $110 billion figure is largely a wish list, composed of deals made under Obama, a few new sales, and a long list of prospective deals that may never materialize. And deals that are made will play out over many years, limiting jobs impact in any given year substantially.

The biggest potential beneficiaries of the U.S.-Saudi arms trade are the nation's largest weapons makers -- Boeing, Lockheed Martin, Raytheon, and General Dynamics. But these sales may be better at generating profits than promoting jobs, as Persian Gulf states increasingly demand employment and technology transfer as a condition of buying U.S. systems."

"How many journalists do the Saudis have to murder and how many schoolchildren do the Saudis have to incinerate before our country finally says ‘enough is enough’? While war profiteers and Trump hotels profit from American manufacturing of much of Saudi Arabia’s machinery of death, Saudi journalists, human rights defenders, and Yemeni civilians pay the highest price. Meanwhile, voters in every district and state are demanding that their lawmakers stop sending weapons that enable Saudi Arabia’s slaughter and starvation-blockade, which has plunged millions of Yemenis to the verge of famine.

For 365 days a year, the Saudi dictatorship benefits from military assistance furnished by the United States. Every day that military assistance continues—whether its arms sales, mid-air refueling of Saudi coalition bomber jets, or other security assistance—is another day when America sends the message that war profiteers are valued above Khashoggi’s life."

"US and UK arms sales to Saudi Arabia are enabling the Yemen conflict and its concomitant violations of International Humanitarian Law and possible war crimes. In addition, these deals are a source of massive corruption, enabling the Saudi royal family to move money from the state fiscus into private offshore accounts across the world."
Also available for media comments

Martin Butcher Policy Advisor, Arms and Conflict, Oxfam Internationa
*  Inclusion on the Forum on the Arms Trade expert list does not indicate agreement with or endorsement of the opinions of others. Institutional affiliation is indicated for identification purposes only. Please contact experts directly for further comments.