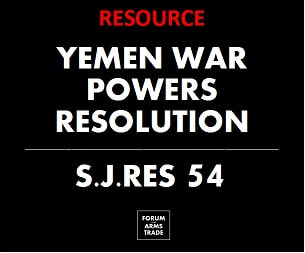 On February 28, 2018, Senate Joint Resolution 54 (S.J.Res 54) was introduced, "To direct the removal of United States Armed Forces from hostilities in the Republic of Yemen that have not been authorized by Congress." The bipartisan measure, offered by Bernard Sanders (I-Vermont) with two original co-sponsors Mike Lee (R-Utah) and Christopher Murphy (D-Conn), had 14 co-sponsors as of March 20.

The resolution specifically calls out U.S. aerial targeting assistance and refueling for the Saudi-led coalition that has engaged in the war in Yemen, where a humanitarian crisis now exists with millions facing starvation. S.J.Res. 54 does not limit U.S. forces active against Al Qaeda in the Arabian Peninsula (AQAP).

On March 8. Senators Todd Young (R-Ind.) and Jeanne Shaheen (D-NH) introduced S.J.Res 55 "to require certifications regarding actions by Saudi Arabia is Yemen," taking a different approach to the issue that S.J.Res 54 supporters argued would be ineffective at altering Saudi behavior.

In the wake of Congressional concern about the killing journalist Jamal Khashoggi and the President's unwillingness to suspend arms sale, plus growing efforts to move the resolution forward, it was again considered in late 2018. On December 13, 2018, the resolution was approved by a vote of 56-41.
​
​Forum-listed experts* to contact on this subject include Kate Kizer (Win Without War), Kate Gould (Friends Committee on National Legislation), William Hartung (Center for International Policy).