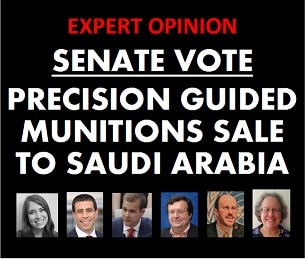 On May 19, Congress was notified of the potential direct commercial sale of approximately $510 million in precision-guided munitions and related services, reversing a suspension that President Obama instituted in December 2016 due to concerns regarding civilian deaths caused by Saudi actions in Yemen. (Since 2015, the United States has supported a Saudi-led coalition aligned with ousted Yemeni president Abed Rabbo Mansour Hadi that has been fighting to capture territory in Yemen from the Houthi, who seized the capital Sanaa in 2014.)

On May 25, Senators Paul, Murphy and Franken introduced a resolution (S.J. Res 42) to block the sale, which Senator Merkley co-sponsored on June 7. Six Representatives introduced (H.J. Res 102) the same resolution in the House. Many of these members of Congress were also involved in efforts to block a US-Saudi tank deal in 2016. Congress can block the president from concluding an agreement if both chambers pass resolutions of disapproval within 30-days of notification of a proposed deal.

​On June 13, the Senate voted on S.J.Res 42, which received the support of 47 Senators. (Please see additional resources here, and archived material after the quotes below.)

The following Forum on the Arms Trade-listed experts* may be quoted as below and are available to talk with media about this topic:

Kate Kizer   Director of Policy and Advocacy, Yemen Peace Project  - June 13. 2017
​
​"After more than two years of US support for the Saudi-led coalition’s disastrous war in Yemen, the Senate is finally wising up. Today’s vote sent a clear message that US support to Saudi Arabia is not a blank check and the Senate will not stand idly by while the Trump administration green-lights the killing of innocent civilians in Yemen by sending more bombs. Ultimately, the solution to Yemen’s war and humanitarian crisis is political and US diplomatic – not military – leadership is necessary to push the parties to the negotiating table. Thankfully, today’s opposition voiced in the Senate gives the administration the leverage they need to do just that – but it remains to be seen if the administration will use it. If it doesn’t, the Yemeni people will ultimately pay the price for America's political cowardice."

Scott Paul Senior Humanitarian Policy Advisor, Oxfam America  - June 13, 2017
​
​"All parties have shown an incredible disregard for the welfare of the Yemeni people, and now more people in Yemen need aid to survive than in any other country. This vote shows that Americans are calling time on our government’s unconditional and unlimited support for Saudi Arabia’s military intervention. Only a political settlement can resolve the issues driving Yemen’s humanitarian crisis. Rather than support Saudi Arabia in a long war that will endanger the lives of millions, the Trump administration should use all of its influence to push the parties toward peace."

​“The Saudi-led coalition has been bombing Yemen without regard to civilians for years, repeatedly striking hospitals, schools, markets, and funerals.  The international community has failed to pressure the Saudis to end their siege on Yemen, which has left millions of Yemenis starving.  Today's vote from the Senate is a clear message of unprecedented opposition to Saudi Arabia's conduct in Yemen: U.S. patience to bring an end to this war is running out fast, and support for the Saudis is reaching an end.  The Saudi-led coalition and all players involved must negotiate an end to this war immediately, and begin the urgent process of reconciliation and reconstruction in Yemen.”

"The Senate's strong vote in favor of blocking a sale of bombs to Saudi Arabia was an important step forward in building opposition to the indiscriminate, U.S.-supplied Saudi bombing campaign in Yemen. It is the latest in a series of expressions of Congressional concern over the U.S. role in enabling the Saudi-led war effort in Yemen, a concern that has grown substantially over the past year. This will not be the last word on the subject. The larger war, including the naval blockade and destruction of civilian infrastructure, has put millions of people at risk of famine and plunged Yemen into what the United Nations has described as the most devastating humanitarian crisis in the world. Continuing efforts to end U.S. support for the Saudi-led intervention are urgent and essential."

“The Senate’s bipartisan stand today against the sale of precision guided munitions to Saudi Arabia puts the Trump administration on notice that their approach is off target.

The United States should not be sending more weapons into an unwinnable conflict and into the hands of a country that uses U.S. weapons against civilian targets. Instead, the Trump administration should use its influence to find a political solution to the disastrous war in Yemen, which has led to a massive humanitarian crisis.

With today’s vote, the Senate is sending a strong message that U.S. arms transfers should not go to states that target civilians and violate human rights.

​Although attention most often arises when Congress is notified of a potential sale, legislators can act at any point until weapons are delivered. This provides Congress opportunities for oversight over the years it takes for arms deals to result in arms deliveries. Congress must now use that authority and should support sensible resolutions such as SJ Res 40 and HJ Res 104 that would suspend certain air-to-ground munition deliveries, including these precision-guided munitions, until the president certifies that the Saudis show commitment to fighting terrorism, facilitating the flow of humanitarian and commercial goods, and to protecting civilians in Yemen.”

“Senator Graham said on the Senate floor this afternoon that the United States needs to sell precision-guided munitions to Saudi Arabia to counter Iran. This misses the point. Saudi Arabia has used US weapons to attack civilians in Yemen, in violation of US and international law. That’s the reason not to sell these munitions to Saudi Arabia.
​
As Senator Murphy said, the Saudis have used US weapons to target civilian infrastructure in Yemen, including water treatment facilities. This has led to the cholera outbreak in Yemen. The United States government should not be encouraging and facilitating these attacks.

The Obama administration placed few restrictions on arms sales to Saudi Arabia. But even they drew the line at these munitions, because of concerns that the weapons would be used against civilian targets. This is no time for business as usual.

​Although many Senators stepped forward to challenge this sale, the majority decided to allow it to go forward. This decision is short sighted, and makes the United States complicit in Saudi attacks on civilians in Yemen."
*  Inclusion on the Forum on the Arms Trade expert list does not indicate agreement with or endorsement of the opinions of others. Please contact experts directly for further comments.
ARCHIVED MATERIAL
May/June 2017 - Precision Guided Munitions Sale Proposed - First Battle in Congress

On May 19, Congress was notified of the potential direct commercial sale of approximately $510 million in precision-guided munitions and related services, reversing a suspension that President Obama instituted in December 2016 due to concerns regarding civilian deaths caused by Saudi actions in Yemen. (Since 2015, the United States has supported a Saudi-led coalition aligned with ousted Yemeni president Abed Rabbo Mansour Hadi that has been fighting to capture territory in Yemen from the Houthi, who seized the capital Sanaa in 2014.)

On May 25, Senators Paul, Murphy and Franken introduced a resolution (S.J. Res 42) to block the sale, which Senator Merkley co-sponsored on June 7. Six Representatives introduced (H.J. Res 102) the same resolution in the House. Many of these members of Congress were also involved in efforts to block a US-Saudi tank deal in 2016. A vote on the Senate resolution to disapprove took place on June 13 and was blocked by a 47-53 vote - a generally unprecedented result on an arms deal. See our resource page on the vote.

In related efforts, Senators Murphy, Paul, Durbin and Franken introduced S.J. Res 40 to suspend certain air-to-ground munition deliveries until the U.S. president certifies that the Saudis show commitment to fighting terrorism, facilitating the flow of humanitarian and commercial goods, and to protecting civilians in Yemen. Additional sponsors have since signed onto the resolution, which would apply to precision-guided munitions in this proposed sale. A similar resolution was introduced in the House on May 25 with 6 co-sponsors -- H.J. Res 104.

On May 30, UN Under-Secretary General for Humanitarian Affairs and Emergency Relief Coordination Stephen O'Brien addressed a special Security Council meeting on Yemen. In his testimony, O'Brien said Yemen now faces the world's largest food security crisis, "with more than 17 million people who are food insecure, 6.8 million of whom are one step away from famine." Alarmingly, a cholera outbreak has occurred, with 60,000 suspected cases since April and 150,000 new cases expected in the next six months. O'Brien predicted than an attack on Hodeida "will directly and irrevocably drive the Yemeni population further into starvation and famine."

Numerous members of Congress and other leaders expressed opposition to invasion of the port of Hodeida, through which the majority of humanitarian and commercial goods flow into Yemen despite damage to cranes and a de facto blockade.

​Official/administration
Congressional actions
Humanitarian Situation in Yemen
Legality of arms sale
Congressional Research Service (CRS) Reports
Additional resources from or quoting experts listed by the Forum on the Arms Trade, or by their organizations*