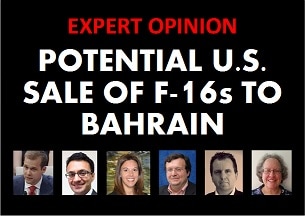 On Wednesday, March 29, the State Department provided an informal notification to Congressional leaders of its intent to proceed with the sale of F-16s to Bahrain without the country meeting human rights preconditions that the Obama administration had proposed before such sales could be approved. If the Trump administration follows the traditional process, the chair and ranking members of the House Foreign Affairs Committee and Senate Foreign Relations Committee would have 40 days to review the sale before the administration would decide whether to make a formal notification.

Any new F-16 sale would need to be officially notified to Congress, starting a 30-day period during which it could prohibit conclusion of an agreement. (See also resource on Foreign Military Sales notifications.)
Forum on the Arms Trade-listed experts* provided the following public comments (March 31) on this topic. Please contact experts directly for further comments:

"The Obama administration held up the sale of F-16s to Bahrain nearly six months ago, conditioned on a private list of reform benchmarks to reverse an unfolding political crisis in the Kingdom.  The Bahraini government ignored those requests, confident that the U.S. government would cave as it had done so many times in the past.  Now, it appears the Trump administration is eager to release the F-16s, despite the Bahrainis taking even more steps backward since President Trump took office - including the dissolution of yet another peaceful opposition party, restoring arrest powers to a domestic intelligence agency, and legalizing the use of military courts for civilians.  Congress has the tools available to stop this sale from moving forward until Bahrain's rulers clean up their act. The Hill should play those cards, not follow the administration's lead by folding at the start."

​“While getting weapons from the U.S., Bahrain’s government is silencing critics at home and participating in a military coalition that is bombing civilians in Yemen. This deal sends a dangerous signal to Bahrain and all other countries that engage in serious human rights violations. It is particularly galling to arm these governments while simultaneously barring those fleeing violence entrance to the U.S. These deals place the U.S. at risk of being complicit in war crimes, and discourage other countries, like Saudi Arabia, from addressing their own human rights records."
[Note: Sunjeev Bery is no longer working at Amnesty International USA nor listed by the Forum on the Arms Trade because his new position is not as focused on these topics, but that does not detract from his analysis offered earlier.]

"The lifting of the hold on F-16 sales to Bahrain effectively rewards (or at the very least ignores) the government of Bahrain’s dismal human rights record. The White House’s advancement of this sale likely indicates the approach the Trump administration will take with regards to U.S. arms sales globally -  prioritization of short-term strategic objectives over long-term democratic governance. Such an approach effectively puts a U.S. stamp on human rights abuses, undermining U.S. doctrine and values, which fundamentally works against U.S. strategic interests and can put U.S. personnel at risk."

"Reversing course on the Obama administration’s decision to withhold a sale of F-16 combat aircraft to Bahrain on human rights grounds sends the wrong message at the wrong time.  Turning a blind eye to that country’s human rights abuses and undemocratic practices will do nothing to contain Iran or advance the fight against ISIS and other terrorist organizations operating in the region.  On the contrary, throwing human rights overboard in the name of misguided expediency and an exaggerated view of the security challenge posed by Iran will only make matters worse, both for long-term U.S. interests and for the people of the region."

"When explosive weapons are used in populated areas it has been shown that, year after year, over 90% of those killed or injured will be civilians. Air strikes are particularly worrisome for civilians. The average number killed or injured when air-launched explosive weapons were used in cities last year was 29 - per strike. Selling F-16s to a country with such poor human rights records as Bahrain is, in light of these facts, worrisome. As we have seen in Syria and Yemen, when governments use planes to wage wars, civilians suffer.  When governments with poor human rights records use planes to wage wars, civilians suffer even more."

"The proposed sale to Bahrain of F-16 fighters puts profits ahead of people, which seems to be a core theme of the Trump administration.President Obama delayed this sale to Bahrain, reportedly setting the condition that Bahrain had to improve its human rights record before the sale would be concluded. But rather than improving its record, Bahrain has increased its human rights abuses, according to Human Rights Watch, which recently asked the UN Human Rights Council to focus on these issues.

*  Inclusion on the Forum on the Arms Trade expert list does not indicate agreement with or endorsement of the opinions of others. Institutional affiliation is indicated for identification purposes only. Please contact experts directly for further comments.