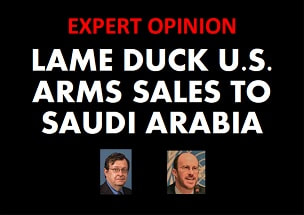 On January 27, 2021, Secretary of State Blinken indicated that the State Department was reviewing arms sales, which was separately and widely reported as including those to Saudi Arabia.

On December 29, the Trump administration notified Congress of potential sale of 3,000 small diameter bombs (GBU-39) to Saudi Arabia for $290 million via the Foreign Military Sales program, amongst a number of other arms sales notifications to other Middle Eastern countries, including Egypt and Kuwait..

On December 23, 2020, Bloomberg reported that the Trump administration has notified Congress of its intent to issue licenses for the sale of "7,500 precision-guided, air-to-ground munitions valued at $478 million to Saudi Arabia." It is our understanding that these would be done under the Direct Commercial Sales program and could only be issued AFTER the expected inauguration of Joe Biden on January 20, 2021. On January 1, 2021, Sen. Robert Menendez (D-N.J.), ranking member of the Senate Foreign Relations Committee, introduced joint resolution 82 opposing the sale.

By law [see CRS report], Congress has 30 days to review formal notifications before a presidential administration could issue a license (in case of Direct Commercial Sales) or conclude a letter of offer and acceptance (LOA, in case of Foreign Military Sales).

The Forum has not identified a statement from the president-elect specifically on this notification, but on October 2, Joe Biden stated, "Under a Biden-Harris administration, we will reassess our relationship with the Kingdom, end U.S. support for Saudi Arabia’s war in Yemen, and make sure America does not check its values at the door to sell arms or buy oil."

Sales of precision-guided weapons (PGMs) to Saudi Arabia have been particularly controversial. Please see our timeline and additional resource (on the right side of that page) for more background.

On December 1, Congress was notified of the potential sale of support services to include technical assistance and advisory support to Saudi Arabia’s Ministry of Defense (MOD) for an additional five years, through the U.S. Military Training Mission to Saudi Arabia (USMTM), valued at $350 million.
Forum on the Arms Trade-listed experts* provided the following public comments (December 23) on this topic. Please contact experts directly for further comments:

[December 29] "​President Trump's lame duck Middle East arms bonanza continues.  Selling more bombs to Saudi Arabia given its history of indiscriminate air strikes that have killed thousands of civilians in Yemen should be a non-starter.  If Congress can't block it, the Biden administration should do so when it takes office, in keeping with the President-elect's pledge to stop giving a blank check of support for the Saudi/UAE war in Yemen. Congress and the new administration should also review the sale of equipment to Egypt in light of its brutal and counterproductive counterterror campaign in the Sinai, which has involved severe human rights abuses, the killing of innocent civilians, and the driving of thousands of families from their homes.  It is particularly concerning that the Trump administration is trying to ram through these controversial deals when it has less than a month left in office."

[December 23] "Bloomberg News has just reported that the State Department has notified Congress of a $478 million deal to sell Raytheon Paveway bombs to Saudi Arabia.  This deal should not be allowed to stand. The United States should not be selling precision-guided bombs to Saudi Arabia at this time, given their leading role in the air war in Yemen which has killed thousands of civilians and prolonged a conflict that is now the world's worst humanitarian catastrophe.  Saudi access to tens of thousands of precision-guided munitions thus far has not diminished the civilian toll in Yemen, so Pentagon claims that more accurate bombs will reduce civilian casualties don't hold up to scrutiny.  A sale could also be seen as a reward to the Saudi regime at a time when it has yet to take responsibility for the murder of Jamal Khashoggi or  reduced its campaign of internal repression against regime critics and human rights defenders.  Last but not least, this should be a decision for a new administration, not a lame-duck president."

"As it is doing with recent arms sales to the United Arab Emirates, the Trump administration is dangerously pushing more weapons into the Middle East to countries that have a record of misusing them. The United States simply should not be selling weapons to Saudi Arabia, especially given their role in exacerbating the suffering in Yemen. The Biden administration has indicated a desire to rethink the U.S. relation with Saudi Arabia. The outgoing president should not use his lame duck period to make that more difficult."
*  Inclusion on the Forum on the Arms Trade expert list does not indicate agreement with or endorsement of the opinions of others. Institutional affiliation is indicated for identification purposes only. Please contact experts directly for further comments.