Arming Saudi Arabia in light of crisis in Yemen 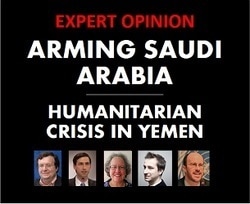 2016
The Obama administration notified Congress of its intent to sell 48 CH-47F Chinook helicopters and related material, valued at more than $3.5 billion, in early December 2016. Earlier, the administration notified its intent to sell battle tanks and other major weapons systems to Saudi Arabia in August 2016, for which more than 60 members of the House of Representatives asked for the notification to be withdrawn. On September 7, a bipartisan group of 4 Senators introduced Senate Joint Resolution 39 to block the sale, which received 27 votes on September 21, thereby not blocking the sale (see expert opinion). On September 20, House Joint Resolution 98 was introduced with the similar intent but not passed. Other recent notifications included support services, Phalanx weapons systems (February 2016), and more than $1 billion in guided bombs and air-to-ground munitions (see also Security Assistance Monitor's Just the Facts). While Congressional leaders have invoked new authorities to monitor arms transfers to Saudi Arabia, they have not blocked current or future transfers. In April, however, two US Senators did introduce legislation to put some limits on sales to Saudi Arabia, but that did not become law. (See also House Joint Resolution 90).

According to media reports, the Obama administration did suspend sales of some precision-guided weapons to Saudi Arabia in December 2016 and cluster munitions in May 2016 over concerns about Saudi use of the weapons in Yemen. (See also information on cluster munitions below.)

On February 25, 2016 the European Parliament voted on: (1) a non-binding resolution on the humanitarian situation in Yemen, which finds that arms transfers to Saudi Arabia violate European arms export regulations (Common Position 2008/944/CFSP); and (2) an amendment calling for an EU arms embargo on Saudi Arabia. More than 20 European NGOs have supported these steps (pdf), highlighting in part a legal opinion issued by prominent UK experts. Shortly after the vote, the Control Arms campaign issued a new case study detailing arms trade with the country. In mid-March, the Dutch parliament voted to refuse arms transfers to Saudi Arabia (see text). On March 22, a number of civil society experts testified at an important parliamentary committee hearing in the United Kingdom (UK) with a pro-embargo message, as did a legal expert on April 13, with additional hearings on April 27 and into May. In late June, a high court in London granted permission for a judicial review into whether arms sales to Saudi Arabia violate national and European weapons export laws, with hearings that began by February 7, 2017 (see blog for context). On July 14, the UK government said that continuing supply would not violate licensing criteria (see item 17). At the Arms Trade Treaty Conference of States Parties in August, states generally avoided this topic, but new publications did track developments related to arms suppliers changing practices, with many tightening control.

At an October 2015 Forum on the Arms Trade event, experts discussed the humanitarian catastrophe in Yemen and called into question the wisdom of additional arms sales to the Saudi coalition. A number of groups based in or active in the United States have opposed future sales at this time. See, for example, joint statement of eight groups (March 22, 2016), Human Rights Watch (March 21, 2016),  Amnesty International USA (December 10, 2015) and the Prevention and Protection Working Group (November 2015).

Saudi-led coalition use of cluster munitions and the harm these internationally banned weapons cause has featured in much of the official government and civil society conversation about the arms transfers to Saudi Arabia, becoming more pronounced in May.

On May 23, 2016 Amnesty International issued a report detailing the presence of unexploded cluster submunitions in Yemen and the threat they pose to civilians, including the finding that several of bombs had been constructed the United Kingdom, which is a State Party to the Convention on Cluster Munitions. The UK Ministry of Defense subsequently said an investigation would be launched into these claims, with Foreign Secretary Philip Hammond saying "There is no evidence yet that Saudi Arabia has used cluster munitions." Minister of Defense Procurement Philp Dunne was similarly quoted as stating in late May that "Based on all of the information available to us... no UK-supplied cluster weapons have been used or UK-supplied aircraft have been involved in the use of UK cluster weapons in the current conflict in Yemen."

"The European Parliament is to be applauded for voting to move towards an arms embargo on exports to Saudi Arabia because of its brutal war in Yemen. European countries, joined by the United States, have been essential suppliers of weapons that Saudi Arabia has used in its military intervention  in Yemen. Thousands of civilians have been killed in the conflict, and the Saudi bombing campaign and related naval blockade have sparked a humanitarian catastrophe. Arms imported from the U.S. and Europe have also facilitated what independent human rights groups have described as possible war crimes. The United States should also stop supplying weapons for the Saudi war effort. It is unconscionable to supply weapons to Saudi Arabia for use in its devastating war in Yemen. These arms supplies need to stop now."

​“This is a very significant step made by the European Parliament. Between 2009 and 2013 EU Member States have licensed arms export to Saudi Arabia for €19.2 billion. An embargo would therefore clearly be more than just a symbolic gesture. It is very important that parliament thoroughly and publicly debated the linkages between arms export and breaches of international humanitarian law and that it has succeeded in reaching a clear decision."

"The recent UN Panel of Experts report on Yemen documents attacks on civilians by the Saudi-led coalition. This contradicts claims by the countries that have supplied the Saudis with weapons that the Saudis have acted in consistency with the laws of war. It’s sadly ironic that at the same time that the European Parliament is encouraging the European Union to place an embargo on arms transfers to Saudi Arabia, the US government is continuing its open-ended arms transfers. Data released this week by the Stockholm International Peace Research Institute indicate that although nearly 60 countries exported major conventional weapons between 2011-2015, the United States was by far the largest supplier, singlehandedly accounting for about a third of the global trade. Given the Saudi coalition’s violations of international humanitarian law, the United States should show leadership by immediately halting weapons transfers to Saudi Arabia and the other coalition members."

Matthew Bolton  Assistant Professor of Political Science, Pace University
​
“This is a test case to see how seriously European countries will take their new obligations under the Arms Trade Treaty to ensure that weapons are not transferred to states engaged in violations of international humanitarian and human rights law. While the US has not yet ratified the Treaty, as a signatory the US should support vigorous implementation of the Treaty’s provisions, which actually accord with US export controls. In Presidential Policy Directive 27, US arms export regulations also require the government to assess ‘the likelihood that the recipient would use the arms to commit human rights abuses or serious violations of international humanitarian law.’ Saudi Arabia’s indiscriminate bombing of populated areas in Yemen surely disqualifies it from further arms deliveries, whether from the US, the EU or any other supplier.”

"Today's decision by the European Parliament is a step in the right direction for sanity in the arms trade and promotion of the groundbreaking Arms Trade Treaty. When countries use weapons indiscriminately, including internationally rejected cluster munitions, and to the harm of civilians as is occurring in Yemen, arms supplies to those countries need to be reviewed and halted."
*  Inclusion on the Forum on the Arms Trade expert list does not indicate agreement with or endorsement of the opinions of others. Institutional affiliation is indicated for identification purposes only. Please contact experts directly for further comments.