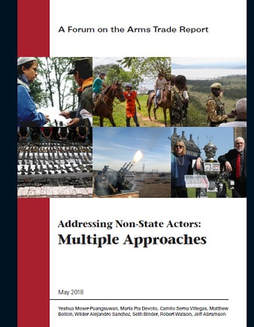 While the attacks of September 11, 2001 focused many in the United States on the dangers posed by non-state actors, challenges to state authority and international order by such groups are not new. With the global community now more aware of conflicts other than those between states, there is a need to better understand approaches that do—or do not—work when addressing non-state actors. Taking a wide view of what they see in their respective work and an expansive definition of “non-state,” experts in this report offer an array of recommendations, in many instances based on working with or engaging nonstate groups.

Drawing upon his experience in directly reaching out to armed non-state actors, primarily but not exclusively around landmine research and anti-landmine advocacy, Yeshua Moser-Puangsuwan offers advice to those who would approach such groups. Recognizing that there is danger in doing so, but also a need from a humanitarian perspective, he recommends being well aware of one’s own goals and the likely expectations of any engaged group as just two of many steps in outreach to non-state actors.

Noting the important achievements of the Mine Ban Treaty, especially in the context of Colombia where former FARC rebels are now engaging in mine clearance efforts, Maria Pia Devoto and Camilo Serna Villegas use developments in the country as an example of how it is possible for non-state perpetrators of armed violence to become agents of reconciliation. After briefly describing a group of 20 former combatants, now part of the “Humanicemos DH” effort, they argue that this work could be a model for other non-state armed groups still in the country.

Matthew Bolton turns to another part of the world to discuss the roots of increased armed violence in Kenya by and against pastoral communities, initially around wildlife “poaching” but now linked to regional and global networks. Drawing upon insights from Arms Trade Treaty (ATT) Academy meetings in the region and other scholarship, he concludes that when agreed by Kenya and properly implemented, the ATT could provide paths to improved community security, in part through increased transparency and better risk assessment in the arms trade.

Wilder Alejandro Sanchez explores the troubling reality that weapons used by armed non-state actors in Latin America often come from the stockpiles of police or national armed forces. While recognizing that there are other sources of weapons and that there have been some successful cases of arms recovery, he argues that much more can and should be done to stem this flow of weaponry. Recommendations include tackling corruption more directly, possibly through stronger training and stiffer legal penalties, and also better sharing of records across jurisdictions.

Seth Binder and Robert Watson tackle the ongoing practice of U.S. arming of non-state actors, noting both recent and historic examples. They argue that the lack of institutional capacity of many non-state actors, as well as the long life of various weapons, contributes to risk associated with such practices. They find that despite claimed goals— often short-term ones—, U.S. aid to non-state actors has typically not proven successful, resulting in unintended consequences and long-term instability.

Jeff Abramson turns the issue around by looking for ways that civil society-led initiatives have an impact upon non-state actors, whether armed or arms producing. Using examples that broadly fall under the “humanitarian disarmament” umbrella, he identifies efforts to convince armed non-state groups to commit to the norms of the Mine Ban Treaty, actions to stop weapons production by stigmatizing financial investment in their manufacturers, and calls by scientists and artificial intelligence experts to prohibit killer robots. He concludes that such efforts focused on human security have a track record of success that merit ongoing support.

Experts listed by the Forum on the Arms Trade were invited to participate in this publication, bringing in other colleagues if desired, to author short essays about how their work provides insights into challenges posed by non-state actors (broadly defined). Rather than create an exhaustive report, the intention is to gather diverse perspectives from those working on arms trade, security assistance, and weapons use, often in different regions of the world and focused on distinct issues. Each essay was reviewed by at least one peer, but each should be considered the independent work of the author(s).

Inclusion on the Forum on the Arms Trade expert list, and inclusion in this publication, does not indicate agreement with or endorsement of the opinions of others. Institutional affiliation of authors, when detailed, is indicated for identification purposes only.