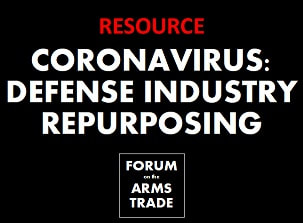 The Forum welcomes assistance in keeping this page up to date, including feedback and information on new developments, which can be sent to to info@ForumArmsTrade.org

On March 18, President Trump invoked the Defense Production Act of 1950 to enable his administration to use that Act to address "health and medical resources needed to respond to the spread of COVID-19, including personal protective equipment and ventilators" and said the "Secretary of Health and Human Services may identify additional specific health and medical resources." On March 27, the President made additional delegations, including for the Secretary of Homeland Security, and said Peter Navarro "the Assistant to the President for Trade and Manufacturing Policy shall serve as National Defense Production Act Policy Coordinator."

As of March 25, his administration had not mandated any changes by U.S. defense industries. Ellen Lord, Undersecretary of Defense for Acquisition and Sustainment, did explain at a press briefing that day that a number of contracts were in existence for medical supplies and that a joint acquisition task force had been set up so that "once Health and Human Services and FEMA...give our acquisition task force the demand signal... we will go out and help them place those orders." On April 11, the Defense Department did issue it's first Article 3 Defense Production Act action to support a "$133 million project ... to increase domestic production capacity of N95 masks to over 39 million in the next 90 days." These included contracts to 3M for $76 million; O&M Halyard for $29 million; and Honeywell for $27.4 million.

Keeping the defense industrial base operating has become a priority for the government, in part through speeding up payments for defense-related projects. Before the end of March, media reports (March 29) indicated that numerous defense industries were closing some plants and were laying off workers.  In her April 20 update, Lord said "We continue to carefully and methodically track the state of the defense industrial base... for prime companies, top 10 defense contractors, and DLA for vendors. Out of 10,509 major prime companies, 106 are closed, with 68 companies having closed and reopened. Out of 11,413 vendor-based companies, 427 are closed, with 147 having closed and reopened." That update also detailed a number of other projects to assist the Federal Emergency Management Agency (FEMA) and Department of Health and Human Services (HHS). She indicated the Defense Department would be "prioritizing approximately $750 million for medical resources" from $1 billion received via the CARES Act. At the same time, she indicated an expectation of a three-month slow-down to defense acquisition programs writ large.

She also said, "The department has leveraged 5,500 contracting actions totaling over $1.5 billion in response to COVID-19. The largest amount is almost $700 million in medical construction for the mobile military medical hospitals. Medical equipment, lab equipment, and testing are all high priorities. The $1.5 billion number includes the $415 million DOD contract in support of Health and Human Services for 60 Battelle Memorial Institute critical care decontamination systems, which will allow medical professionals to reuse masks up to 20 times, reducing the nation's need for new inventory."

The Forum has yet to identify a consolidated list of efforts by defense-industry companies to retool or expand capacity to address pandemic-related health needs. It has, however, found some examples of desire or activity by industry. For example, in Kansas, the president of the president of the local International Association of Machinists and Aerospace Workers issued a letter on March 28 calling for a prioritization of work on health-related equipment. In early April, Textron Aviation announced (tweet) plans to work on face shields and masks. See also Lockheed Martin (March 27) and the Aerospace Industry Association (resource page). According to media, on March 23 Remington Arms offered unused factory space, but apparently not equipment or personnel, at its Ilion, New York plant, for "ventilators, surgical masks, hospital beds or any other products mission-critical to the war on coronavirus.”

Separately, a number of automobile companies (including Ford, General Motors [GM], and Tesla) have formed partnerships or indicated plans to assist with ventilator production. On March 27, President Trump used the Defense Production Act (DPA) in relation to General Motors, saying the Secretary of Health and Human Services "shall use any and all authority available under the Act to require General Motors Company to accept, perform, and prioritize contracts or orders for the number of ventilators that the Secretary determines to be appropriate." (See also March 27 remarks, and statement, and this story for context)  He used the DPA again on April 2 for N-95 respirators in relation to 3M. As these are not core defense industries, the Forum will not closely tracking these developments.

Prime Minister Boris Johnson on March 16 requested that manufacturers, including those in defense industries, assist in COVID-19 response -- particularly related to ventilator production. That appears to be voluntary at this time.

Industry groups have responded, in part through the UK Ventilator Challenge consortium (with 10,000+ units), with plans to produce 30,000 ventilators (update- March 29). These include companies with significant involvement in aerospace defense production (percentage of arms sales as of total sales based on SIPRI data): Meggitt (35%), GKN (parent company Melrose - 8%), Airbus (15%), and Thales (50%).
India

The announcement also indicated that the effort involves "tying up with some private companies to make personal protection equipment such as body suits and also ventilators," but at this point the Forum cannot determine if those are defense industries. (See related The Hindu and Jane's articles.)
Italy

The Forum is seeking more information about the possibility of Beretta voluntarily aiding in 3D printing of valves for some ventilators, as reported here, or other steps being taken by defense industries in the country.
Turkey

The Forum is seeking more information about policies in Turkey, noting this report that a drone manufacturer and other industry actors are shifting some design and production capacity to manufacture ventillators.
Latin America

Wilder Alejandro Sanchez reported in Janes (April 7) that a number of Latin American defense industries are "now producing an array of health equipment from face masks and hand sanitiser to ventilators." Within the region, a number of defense industries are state-run.
* These experts are available to discuss this issue and may have additional/alternate assessments. Inclusion on the Forum on the Arms Trade expert list does not indicate agreement with or endorsement of the opinions of others.